It all started when a fellow-student at the University of Cape Town, Mac, invited me to spend a holiday with him at his parents’ home in Salisbury, Rhodesia (now Zimbabwe) during the winter vac of 1965. He said that he had unfortunately already committed himself to a lift in someone else’s car but he thought he could arrange a suitable travelling companion who would pay half the travelling costs. The companion turned out to be someone that men might only dream about – a tall blond with perfect legs, perky breasts, a face with ethereal beauty, intelligent, charming, and with a seductive Canadian accent. She was Jill Bailey, the UCT rag queen, and she was willing to spend two days with me in my Ford Anglia.

There was only one small cloud on the horizon. Jill thought that her boyfriend Jeff Johnson, whose home was also in Salisbury, might want to join us on our journey. And that’s how it turned out.

But, being an impoverished student, I had to look on the bright side. At least the petrol costs were split three ways instead of two. And Jeff turned out to be a good travelling companion. But that’s enough about Jeff and Jill.

In the middle of the vac Mac decided that a group of us should drive in a couple of cars to Beira in “Portuguese East Africa” (Mozambique) for the four-day Rhodes and Founders weekend (it was celebrated on the first Monday and Tuesday in July – together with the preceding two days).

When we eventually got into the prestige Estoril resort (after surrendering our passports to the authorities in the main hotel building) we drove through the grounds looking for a suitable space to pitch our 12-man tent. We hadn’t gone far when we heard the sound of a siren. My companions muttered about the militant Portuguese (always referred to as “Porks”), as a short, rotund man wearing a huge revolver on his hip got off his large motorbike and swaggered over to us muttering about a speed limit of “10 milos” that we had presumably exceeded. John Ovenden (a charming chap who trained the drummies for the rag procession) got out of my car to meet him. When the cop saw John his demeanour changed immediately. His scowl changed to a broad smile, and he fell on John’s neck and embraced him, crying, “Zjonnie, Zjonnie . . .”

Later, my companions explained that this was the Pork involved in arresting John on a previous occasion for directing traffic in the middle of Beira wearing nothing but bra and panties. Somehow John had managed to inject a sense of humour into this man’s makeup during his brief incarceration. At any rate the cop escorted us to what he thought was the best site for us – outside the ladies’ loo.

This turned out to be pretty good thinking, as every girl in the camp had to walk past our tent at least once a day . . .

We managed to inveigle a few luscious lasses to sup with us from time to time, but found that most lost interest when we demonstrated our time-saving method of washing up. This consisted of shoving the dirty cutlery and crockery into the sand beneath our feet a few times – we thought the sparkling results were worthy of expressions of wonder and not disgust. Every evening we would walk 100m to the pavilion for a bout of beer drinking, and singing – when the two rock bands would shut up and give us a chance. We confidently believed that our small group of 10 out-sang Big George and his motorcycle-gang of 30-odd, because we knew all the words to our songs, some of which had been composed by our friend in Salisbury, Clem Tholet (who married Ian Smith’s daughter and later ran an advertising agency in Cape Town). Our favourite was sung to the tune of Hark the Herald Angels Sing, and went:

(In case you think we were being blasphemous I should point out that I learned from a radio program that Christmas carols were originally popular secular songs that were adapted by the clever clergy to make singing in church more popular with the general populace; and when Mendelssohn composed the music used for Hark the Herald Angels it was to celebrate 400 years of printing – and he specifically requested that the music should NOT be used for sacred purposes. He felt it was far too jolly.) 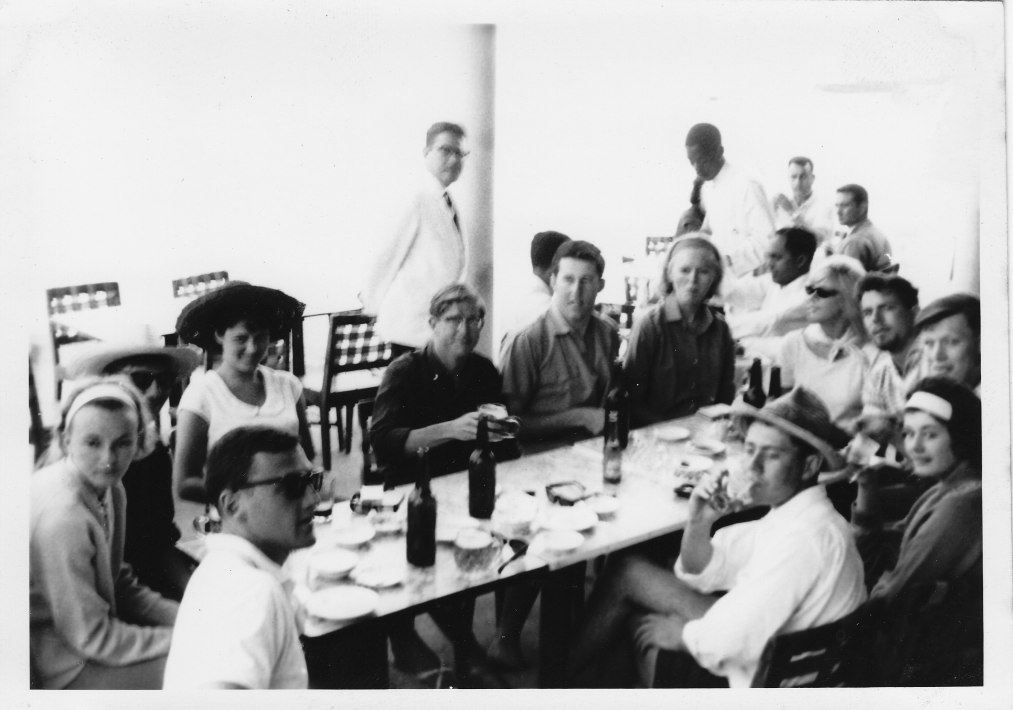 When we weren’t singing and drinking (in the pic above I’m the one drinking) we did a little dancing with girls who had not yet been repelled by our culinary cleaning methods. At 8.30 every morning we would march back to the pavilion with our empty bottles and stock up with a fresh supply of Manica beer which we took down to the beach and drank while watching the waves (very small), the girls, and George and his gang playing bok-bok. On the second morning a wandering tattoo artist offered his services and I agreed to have a tattoo providing the others paid the fee. While I was having the words HI THERE tattooed on the sole of my left foot a crowd gathered around me and wags made witty remarks like, “Ah, a foot note.” It was then that I discovered that with fame comes groupies. Well, one anyway. She was one of the hotter chicks on the beach and came and snuggled up next to me for most of the day (see below). 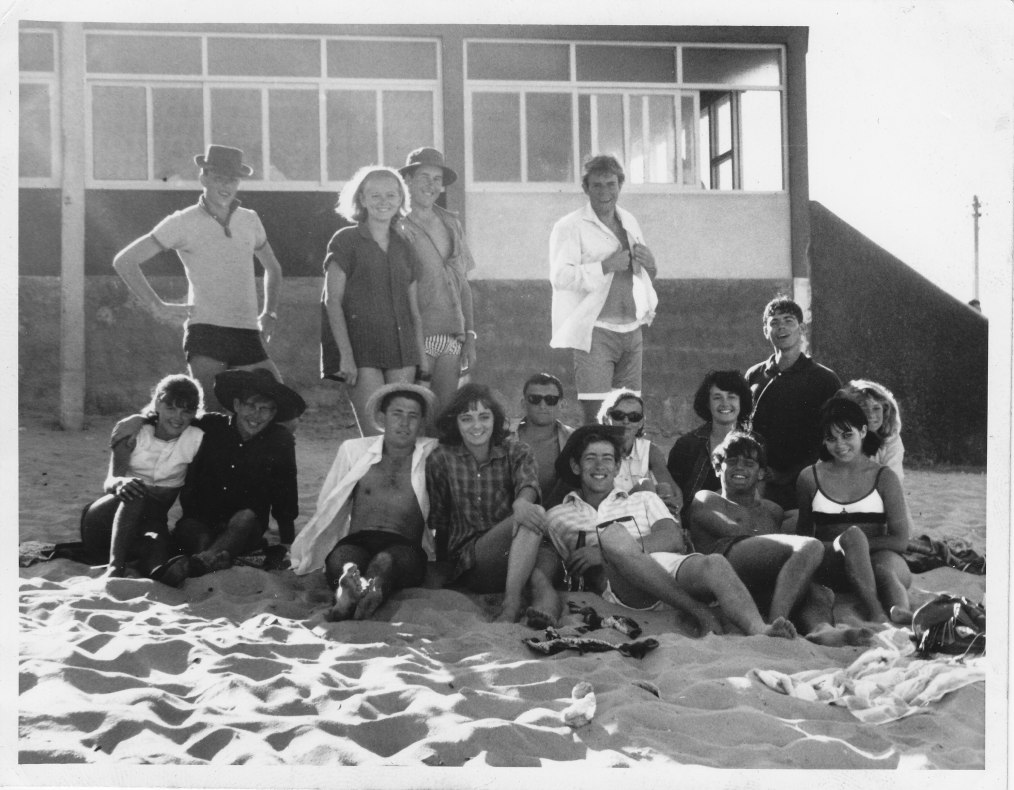 Mac and new friend in front on the far left, then me with shirt open + groupie, and Ovenden (RIP) with hat and white shirt in front.

One of the things we liked about Mozambique was their attitude to alcohol. At even the humblest café in the countryside the waiter would bring the booze to us in unopened bottles (so we could treat them as take-aways if we wanted to), and free snacks such as chicken giblets floating in a succulent sauce together with chunks of bread on the side to soak up the sauce. Even the smallest place had a few solid wooden tables and chairs in a separate dining area, and the atmosphere was suitably continental. So different to South African “cafés” with their Formica-topped counters and boring sweets and snacks wrapped in plastic.

One day in Beira the gang decided to have lunch in town without spending a cent on food. We descended on a succession of hotels and outdoor cafés and ordered one beer each. We wolfed down the free snacks at each place without ordering more to drink until each proprietor got wise to us and we had to move on. When we got to the last (upmarket) establishment – a large indoor/outdoor restaurant – I was still pretty hungry. I spotted a man sitting on his own at a table outside toying with an octopus. I said to him, “Are you finished?”

I picked up his plate and marched into the restaurant where my friends had already seated themselves, proudly bearing my prize at shoulder level like a headwaiter carrying pheasant-under-glass. Even this rough bunch of students was a bit aghast at what I had done, and proposed to do. But there was quite a mound of octopus left, including a few tentacles, and I tucked in. It wasn’t bad – just a bit rubbery.

Meanwhile my friends had found the secret to successful scrounging: tip the waiters generously. Once rapport with the help had been established plate after plate of delicious mussels and other snacks arrived. And we were able to limit our drinking to an almost abstemious level.

At the beginning of our holiday we had had a little trouble at the border post getting my Anglia into Mozambique without a triptyque. This was resolved by John Ovenden (see 1960 Anglia and Ovenden below).

He chatted up one of the Rhodesian officials who “exported” my car to Moz, and made us promise to tear up the relevant document once we’d got past the Porks on the other side. Naturally, we hung onto that piece of paper for dear life in case there was trouble when we wanted to get back into Rhodesia. Sure enough, at the end of our holiday the Porks let us out of their country OK, but the Rhodesians demanded to know how we’d got into Mozambique without documentation. Once again Ovenden came to our rescue and saved us from having to produce the illegal export document. He noticed that nobody at the post had more than two stripes on his arm, and said, “A man with three stripes said we could go through.” That shut them up. They stamped our passports and let us through.

I guess things are different now.

2 Responses to BLOTTO IN BEIRA