Cape of Storms and Superlatives (5) 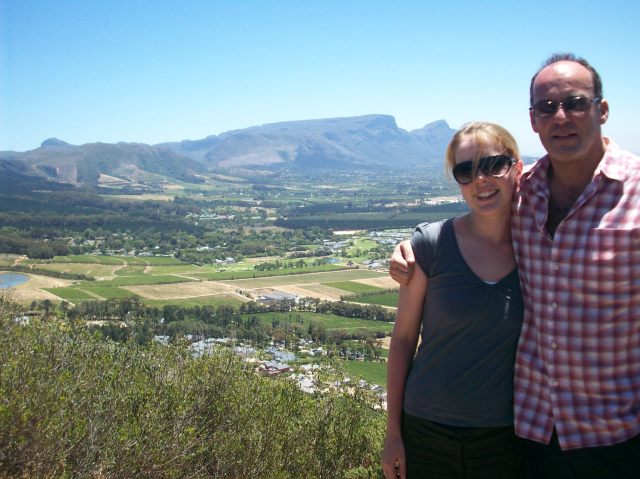 Clever contributors to local talk radio have said that the reason why Chapman’s Peak Drive is still closed is that the company running the show is paid just as much whether the drive is open or closed. So the lazy buggers have little incentive to get a move on and clear the rockfalls, repair the catch fences and generally pull their finger out.

Whatever the reason for the seven-month closure, tourists doing a tour round the Cape Peninsula have to backtrack down Chapman’s Peak and go over Constantia Nek. One advantage of this is that it gives me the opportunity to trot out a few more superlatives.

For a while we follow the route of the 56 km Two Oceans Marathon (“the world’s most beautiful marathon” is what the organisers call it). I tried it once, and at the 26 km mark I hit the wall and had to run the last 30 km on sheer willpower. I can remember forcing myself to run every step of the way up the steep hill leading out of the Hout Bay valley, passing fatter Gautengers walking up, and then watching the same fatties running past me on the way down. What the hell, I finished the bloody thing in just under 5 hours 40 min and have the satisfaction of knowing that I ran every step of the way.

Back to the superlatives: for a few years in the 80’s the route used to go along Klaassens Road in Bishopscourt, and on this road four world records were broken. In 1988 Thompson Magawana went past the 30-mile mark in 2:37:31 for a new world record and past 50 km in 2:43:38 – also a world record. He won by more than 9 minutes in 3:03:44 to set a new record for the race, “certainly the most incredible ultra-distance performance ever seen in South Africa” according to Riel Hauman, author of Century of the Marathon: 1896-1996.

The amazing thing is that, some 20 years later, all six of those records still stand. If you don’t believe me google the names above or go to http://www.americanultra.org/stats/world_records.htm

Jan van Riebeeck and 90 settlers helped to get a garden going in Cape Town to supply the ships on their way to the east. He stayed exactly 10 years, and left on 6 April 1662. After he left there was a succession of leaders here, but none of them made any great impression until a man called Simon van der Stel came on the scene. This was a man of great vision who really helped to get things going, especially in the Stellenbosch district which became the leading wine producing region in South Africa.

After he got farming going there, and motivated his men to complete the Castle, he decided that he would like to have his own wine farm – but closer to the Castle where his office and residence was. So he had soil samples taken from all around the Cape Peninsula to find the best spot, and on page 28 TV Bulpin records the following in his excellent and “opinionated” Discovering South Africa: “Before he left for India, on 16 July 1685, the Lord of Mydrecht [Hendrik Adriaan van Rheede] showed the Dutch East India Company’s high appreciation of Simon van der Stel for his constancy, dedication and loyalty, and their desire for him to remain in the Cape as long as possible. He was granted the superbly situated piece of ground beyond the last farm then occupied at Wynberg. The Commander selected this handsome estate himself, carefully taking into account the variety of soils, altitudes and micro-climate, all factors of decisive influence in farming, and especially in viticulture. Title to the estate was granted on 13 July. The gratified Commander named it Constantia, presumably in honour of the young daughter of Commissioner Rijkloff van Goens who had that name, or simply that the name meant ‘constancy’.”

That sounds pretty authoritative, except that Phillida Brooke Simons in Cape Dutch Houses and Other Old Favourites says on page 59 that Constantia was named “possibly after the granddaughter of Commissioner van Goens”, and Ed Coomb & Peter Slingsby in their book Beard Shaver’s Bush: Place Names in the Cape say on page 25 that Constantia was named after the daughter of Baron van Rheede (who they claim was a commissioner). It seems that they are mixing him up with Van Goens who was the commissioner (Van Rheede was a member of the governing body of the Dutch East India Company and was on an official visit to the Cape).

So we seem to have two votes in favour of a daughter, and one (from Phillida) for a granddaughter. I’m one of the few lucky people who can claim to have spent some time with both TV Bulpin and Phillida Brooke Simons. Both impressed me with their knowledge; but if I have to choose who is more likely to be correct I’d go with Phillida. She is a noted historical researcher, and gives a bibliography at the end of her book, while TV does not (and can’t argue with me because, sadly, he passed away on 3 October 1999).

After Van der Stel died in 1712 his farm was cut into three, and then further sub-divided. The portion containing his manor house was named Groot Constantia. In 1791 the then owner, Hendrik Cloete, employed an architect Louis Michel Thibault to design a capacious double-storeyed wine cellar, and a sculptor Anton Anreith to adorn its pediment in stucco relief. Phillida says in her book: “It shows the young Ganymede, a cup-bearer to the gods, surrounded by frolicking cherubs, all fashioned in irrepressible rococo style.”

What she doesn’t tell you is why one of the cherubs is unmistakably female, while all the others are male – probably because she hasn’t heard the following little-known story. A trusted source told me that in the 1950’s her father was in charge of the maintenance at Groot Constantia, and that one day his workers were giving the pediment a thorough brushing prior to repainting it. Unfortunately the vigorous brushing dislodged the male appendage of one of the cherubs and it ended up smashed to pieces on the ground below. In South Africa we have a saying, ‘n boer maak ‘n plan (a farmer makes a plan). Mr Manley the maintenance man realised that it would be extremely difficult to stick all the pieces together again, and that it would be much easier to do a little amateur resculpting of the empty space left between the cherub’s legs, and turn it into a female. The cherub in question is just to the right of the lower centre of the pediment, proudly pushing out her pudendum for all to see.

Sure God created man before woman, but then again you always make a rough draft before creating the final masterpiece. – Robert Bloch

5 Responses to Cape of Storms and Superlatives (5)